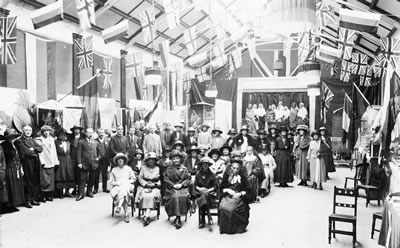 After several months of serious fundraising, the dance was held on the evening of Friday 10 December 1919. The expected audience was over 600. Cumnock Parish Medals would be presented to those who served and were in attendance – this took quite a while! Speeches were made by newly elected Provost Andrew Millar, Brigadier-General Pollok-McCall, Colonel John D Boswell, the Women’s Work Party Committee, representatives from the Town Council, Parish Council, Education Authority, and from the various committees of the War Memorial and Welcome Home Fund.

The large hall was beautifully decorated for the occasion with flags and streamers, a large banner with the words ‘Welcome Home’ occupying a prominent place. The hall was filled with about 340 soldiers and their partners, and while they were assembling Tom Buck’s orchestra of six players played spirited selections. Had it been possible to secure a building capable of holding thousands instead of hundreds it would have been filled to overflowing – everyone being anxious to be associated with what must have been regarded as a unique and historic gathering.

The presentation of souvenir Cumnock parish medals was then proceeded with – this had been so well organised that the 340 medals were handed over in record time. Each man had been supplied with a number, and was seated in the hall accordingly. They were called out into the entrance lobby in fifties and marshalled into order leading to the platform door. As the name of each soldier was called out he advanced to the table in the centre of the platform, where he received his medal from Miss Urquhart, secretary of the Work Party, and returned to his seat by way of the other end of the platform. A continuous round of applause was kept up during this ceremony and several of the recipients came in for a special cheer.

Colonel Boswell, in proposing a vote of thanks to the Work Party, told how much their parcels of comforts and good things were appreciated and looked forward to by the soldiers. The hall was quickly cleared of the seats and dancing was soon in full swing. Meanwhile the first of four relays sat down to tea in the lesser hall, and here the work of the Work Party was much in evidence. But that did not finish the labours of the women and their many willing assistants, for, after everybody had been “tead,” the lesser hall was converted into a running buffet, and there was an unlimited supply of everything right up till the close at two-thirty. In the Council Chambers downstairs ices and aerated waters were dispensed and taken full advantage of. By all accounts there was nothing but the highest praise from the guests for the very generous way in which they had been entertained. The attractions in the various refreshment rooms relieved the congestion in the dancing hall, where, under the supervision of Hugh Blackwood and Herbert Morton, the big company enjoyed themselves to the full. Without a doubt the Welcome Home celebration was long remembered by all who had the pleasure of taking part in it. 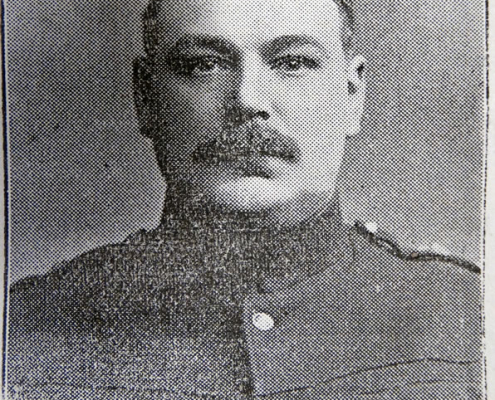 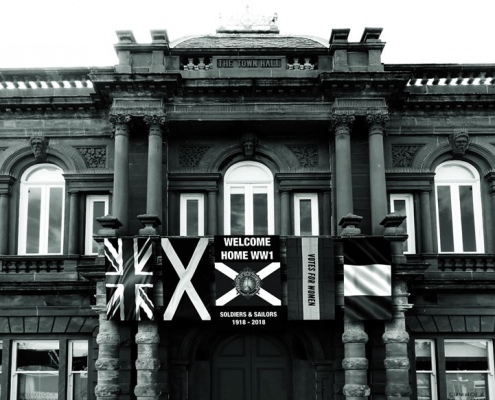