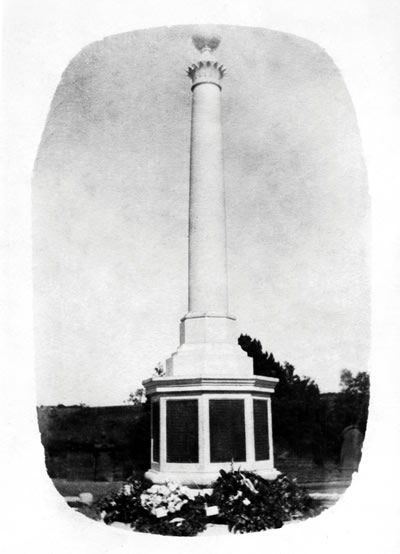 By February 1920 the War Memorial fund met and found they had £748 left after the payment of the parish medals and the the Welcome Home Dance. Further fundraising was required to pay for the memorial.

By March five sculptors were asked to submit ideas and 16 different designs were looked at including; a 16-foot high granite column surmounted by a metal-cast Lowland Scot Soldier sculpture on a 4-foot square granite block on a base costing £1,200 and a Celtic Cross in red granite and lead lettering costing £1,000.
Several different sites were looked at including the Square, the grounds of the school at the Barrhill, in front of the Town Hall, the site of the new houses at Gemmell Avenue and the central space at the new cemetery – the latter was chosen.

By April the winning design by monumental sculptors Mathew Muir & Co from Kilmarnock was chosen. The memorial was described as “Built of grey Creetown granite and 20-feet high and 7-foot wide at the base. The underpart and body of the structure is octagonal having 8 panels for names. This is surmounted by a 9-foot column all in one stone which terminates with an emblem of a martyr’s crown above which is a ball, an emblem of the new world. A low coping in the same material will enclose the space.” Bronze tablets with raised lettering were chosen which were slightly more expensive that lead lettering. The total cost of the monument was over £2,000 – all raised by further fundraising.

By May 1920 the names to be featured on the memorial were published in the Cumnock Chronicle and any additions called for. Quite how the names were selected is not clear. Presumably they were included if Cumnock was on their service records as either a place of birth, residence or enlistment, or if a local resident wished a relative to be added. By July the contract had been signed with Matthew Muir and Co and work on the monument had begun. By January 1921 work was progressing and a report from the committee stated that the granite part of the monument was lying at Dumfries ready to be sent on for erection but there was a delay with the eight inscribed panels. Four of these were complete and four still to cast but due to the slow process this would take a few more weeks to finish. By April 1921 plans were being finalised for an unveiling ceremony in June.

The memorial was unveiled by Lieutenant Colonel Archibald McInnes Shaw of Ballochmyle on Saturday 25 June 1921 in the presence of several thousand onlookers. It was an ideal summer day and people met at the Town Hall where the gathered soldiers, bands, organisations and platform party were slowly led up Glaisnock Street by a pipe-band playing Flowers of the Forest. In the cemetery a platform had been built behind the monument and facing the gates and once the crowd had taken their place the Rev John Warrick led the dedication prayer. After this Provost Andrew Millar made the unveiling ceremony address and handed over to Lieutenant Colonel Archibald McInnes Shaw who removed the Union Jack covering the name plaques and paid tribute to the men who had given their lives and to the men and women who had remained at home and supported the fighting men. Rev Warrick gave the benediction and many wreaths and bouquets were laid at the base of the monument.

The following day, there was an almost constant stream of visitors to the cemetery, and a unanimous opinion was expressed on the beauty of the design of the memorial and on the clear and lasting lettering on the inscriptions. 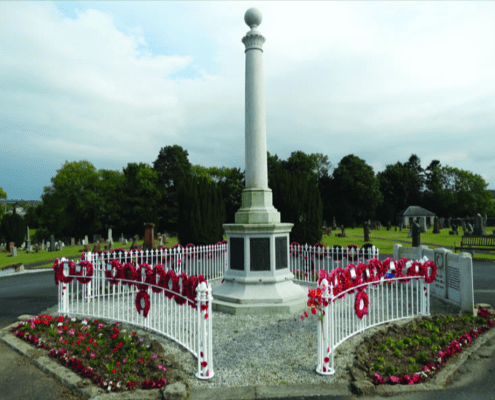