Green Mill was on the river Lugar on the site of the present Cumnock Academy. Greenmill Primary School, which occupied the site first was named after the mill.

Green Mill appears on OS maps as far back as 1845 but I suspect it is much older. The dam at the Lugar, which fed the mill, was cleared by 1944 but the old mill lade, although filled in, could still be traced from the intake to the mill in a straight line, the tailtrace continuing in the same straight line to join the Lugar and cutting through a loop of the river of some acres in extent. The mill stood on a level field which gave a full view of the buildings which were unusually extensive for a country mill. 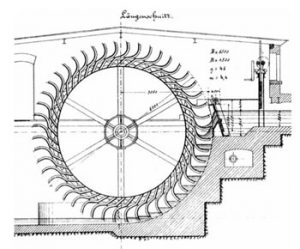 The water wheel had been a breast wheel and would have needed a large supply of water which would have been available from the Lugar. The mill was a flour, oatmeal and provender mill. Four pairs of stones would have been required with a Bouton machine with fine wire-cloth for dressing and grading the flour, also a smut machine for cleaning the wheat before milling. Sometimes the shelling stones were used for this purpose but Derby-peak stones were usually preferable.

Green Mill closed in the early 20th Century and parts of the building were still in existence when Greenmill Primary school was being built in1954 but the buildings were demolished soon after.

In the 1851 census William McGavin from Sorn was living there as Miller and Farmer Of 10 Acres with his wife Catherine Drummond, youngest son Robert, also a Miller and two grand daughters. He was related to McGavin the Cumnock Baker. A tragedy happened to the family in 1844.

Ayr Advertiser 8th June 1844
DEATH BY DROWNING
On Monday last the following distressing accident occurred at Cumnock. A little fellow, aged two and a half years, son of Mr William McGavin, miller Greenmills, while amusing himself by plucking flowers that grow on the margin of the mill-lade, overbalanced himself and was swept down by the stream. The occurrence was not noticed and it was some time before the body was discovered floating in the watercourse. Medical assistance was procured and the usual remedies resorted to but in vain – the child’s spirit had fled to another and better world.