The National Keir Hardie Committee commissioned the Queen`s sculptor in Scotland, Benno Schotz, to create a bronze bust of Keir Hardie. Copies of the bust were made – one went to Merthyr Tydfil in Wales where Keir Hardie was MP – one went to the Houses of Parliament – and the third to Cumnock and another to Kelvingrove Art Galleries in Glasgow in October 1939, see article. Is it still there?

Mrs Nan Hardie Hughes , in her position as provost of Cumnock, accepted a bronze memorial bust of her father, James Keir Hardie , the Socialist pioneer, which was un- veiled at Cumnock on Saturday . The bust the work of Mr Benno Schotz , R . S . A ., is placed on a red granite pedestal in front of Cumnock Town Hall , the village in which Hardie spent 30 years of his life . A large number of people attended the ceremony and the demonstration which followed , where tributes to Hardie’s work were paid by all speakers, among them Mr James Maxton M . P ., leader of the I . L . P .. and the Rev . James Barr . M . P . The bust was unveiled by Keir Hardie’s biographer , Mr William Stewart , who in asking the Town Council to take charge of ! his memorial to their most famous citizen ; said it was appropriate that a visible memorial to Keir Hardie should be placed in Cumnock where he spent the greater part of his life . From Cumnock he started out in that career of service which placed him in history as one of the great pioneers of the world-wide Socialist movement . A new generation had arisen , to whom would be the duty of bringing about that change in society for which Hardie had laboured all the days of his life . Whether that change came late or soon, it would have been due to a very great extent to the work and sacrifices Keir Hardie made .

Keir Hardie , he continued , was a man ofthe common people , and he gave his whole life to their service, and through them to the service of humanity He was richly endowed with the gift of leadership and with a courage that enabled him to face al lopposition from the vested interests of his time . He believed in the class to which he belonged , and he believed that that classw as destined to be the ruling class of this country and of all countries, and Keir Hardie worked to bring about a new way of life wherein there would be no such thing as poverty and no such thing as war. 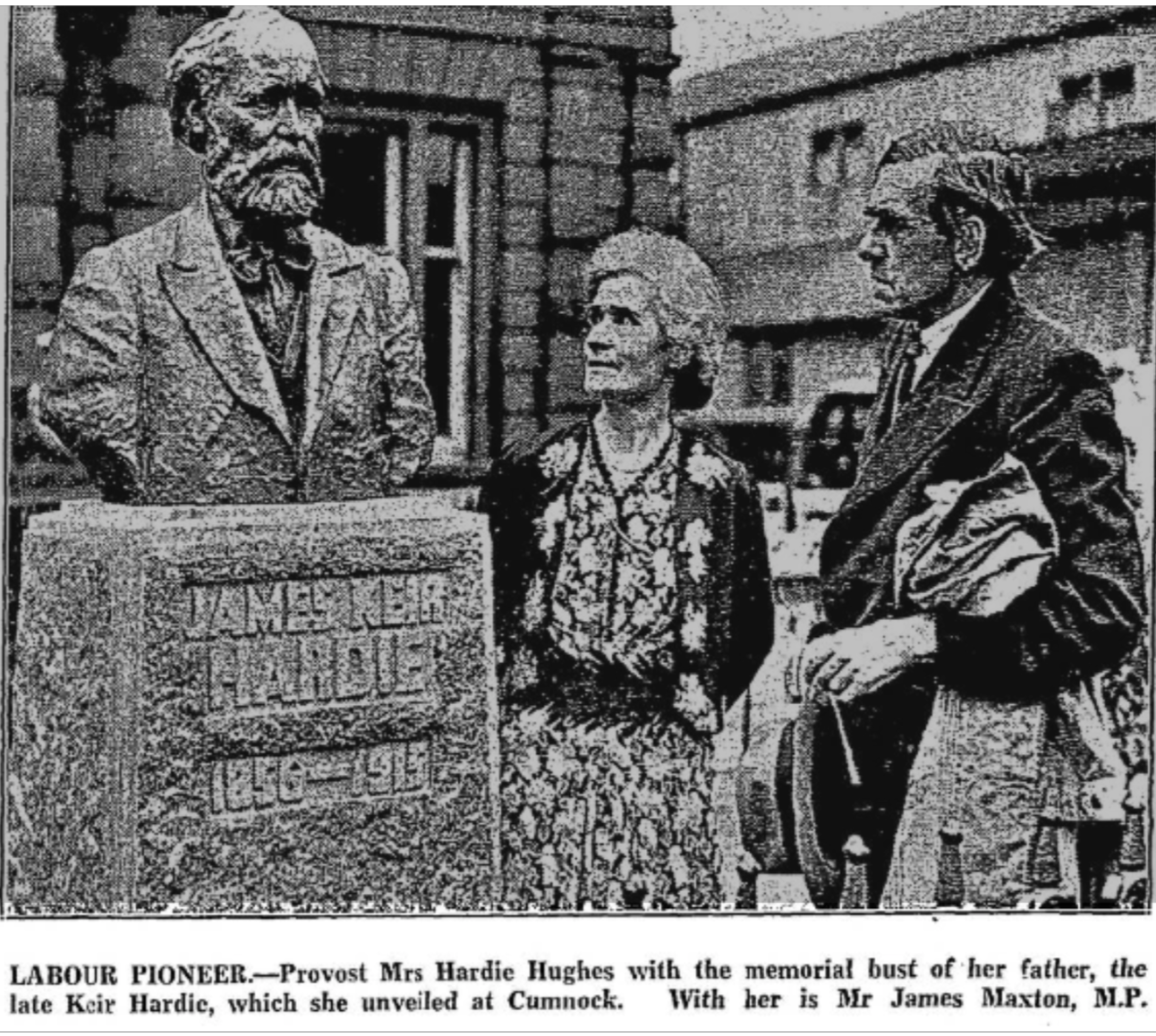 The bust was presented to the Burgh of Cumnock by William Stewart and accepted by Nan Hardie Hughes, Keir Hardie`s daughter – who was Provost of Cumnock at the time. The bust was unveiled in August 1939.

1939 Film of the unveiling of the bust 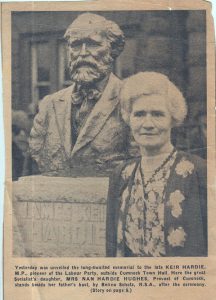 (KEIR HARDIE BUST FOR GLASGOW The Keir Hardie Memorial Committee are presenting a bust of the Socialist pioneer to the Kelvingrove Art Galleries , Glasgow , to-morrow . The bust was executed by Benno Schotz , R . S . A . Mr’ Robert Murray , chairman of the Memorial Committee , will make the presentation , and Bailie Tom Kerr will receive the bust on behalf of the Art Galleries Committee of the Corporation . The Scotsman October 26, 1939) 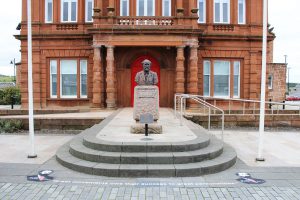 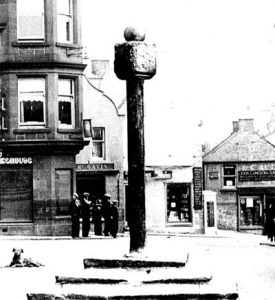 In 1509 Cumnock was created a burgh of Barony by King James IV. An important outcome of the Charter was to establish Cumnock as a market town denoted by a Mercat Cross.

In 1703 the original Mercat Cross was replaced by the present Cross as a continuing symbol of Cumnock`s status as a burgh of Barony. The Cross has a plain shaft capped with a cube and ball finial. On the sides of the cube are the arms of the Dumfries Family, a sundial and the legend “1703 repaired in 1778”.

The Cross has stood in various locations over the centuries, from its original position in Townhead Street (cobbles on the street indicate where the cross once stood); to the north – east corner of the square; to near the front door of the parish church; to its present location at the south western corner of the Square. The Cross, a registered ancient monument, was restored again in 1974.

When the street were lit by gas lamps, little concerned with ethical considerations the council fitted a standard gas lantern fitted to its crowning orb in the 1880’s but this was removed in 1911. 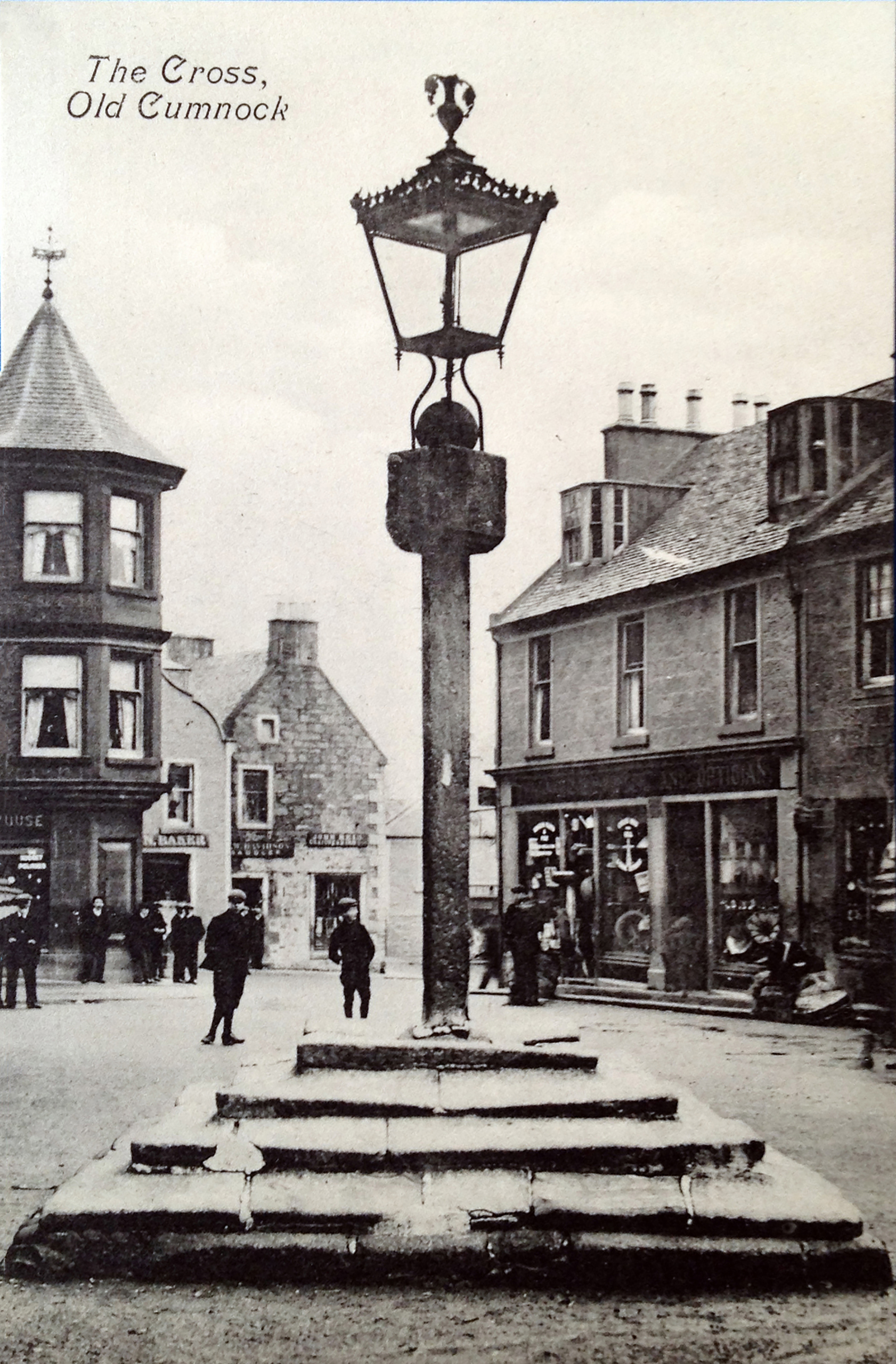 In 1983 the Council chose as its common seal a device ‘shewing the Old Cross in the Square, with a weaver’s shuttle on the one side and a sheaf of corn on the other.’

One local councillor, James Neil, campaigned for the cross to be moved in 1925 but this had to be dropped after a public outcry led by Dr James McQueen one of the local doctors. CHG member Garry Savage found this poem which describes this in Scots verse and well worth showing as it gives a unique insight into how unpopular this was throughout Cumnock.

To the Cumnock Cross

Auld Cumnock Cross! We ken ye fine,
Your steps are worn by Faither Time;
Wi’ you oor freenship we aye seal,
Nae maitter though the cauld we feel:
On Hogmanay at twal o’clock
We staun below the Auld Kirk nock,
An’ wi’ a hottle in oor haun
We drink tae freenship ower the laun.

It’s no sae very long ago
Oor Bailies said that you maun go;
Since motors no the Kirk go roon,
They couldna hae you in oor toon:
An’ made tae shift you oot your place
As if you had been in disgrace.
They thocht that they couldna be seen,
And clean forgot aboot McQueen.

Oor Doctor, whae we ca’ McQueen –
Nae better doctor could be seen –
He heard the Cross was in a plight;
Says he, “By jings. for you I’ll fight;
Though Bailie’s heids are made o’ wid,
I’ll tak’ frae them a pint o’ bluid;
Tho’ a’ the Bailies should start greetin’,
O’ toonsfolk I will ca’ a meetin’.”

I met him on the meetin’ nicht,
He left his rooms, took tae the richt,
An’ up Munn’s Brae he went wi’ speed,
The sweat was drappin’ aff in beads.
Whaur he was gaun he ne’er let on,
A big, thick stick was in his haun,
His lips were movin’ awfu’ quick
As on the wa’ he tried his stick.

The Toon Hall could haud nae mair
The time the Doctor took the chair;
The Bailies on the platform shook,
They meant McQueen’s big stick tae jouk:
For noo he met them face to face,
An’ saw each ane kept in their place,
An’ telt them that they a’ kent fine
The Cross was built wi’ Benston lime.

He made them leave the Cross alane,
An’ daured them touch a single stane;
He swore that motors must steer clear,
Or else frae him they sune would hear;
An’ sent the Bailies tremblin’ hame –
He daured ony ane tae try again;
The “vandals” were very gled tae get oot,
They thocht McQueen meant bluid, nae doot.

We gie the Doctor a’ oor thanks
For cuttin’ short the Bailie’s pranks;
It didna tak’ him long tae settle
They wadna mak’ the Cross road metal.
An’ may he aye hae time tae spare
Tae view the Auld Cross in the Square;
For though it noo is auld an’ worn,
Tae save the Cross the Doctor’s sworn.

The Peden obelisk was erected in 1891 to mark the spot where “Peden the Prophet” was finally buried. It is the third memorial to mark the grave – the two previous stones still surviving. Made from Aberdeen granite and designed by R S Ingram, the memorial was unveiled on 16th July 1892 by Professor John Stuart Blackie.

Peden’s Grave before the erection of the monument from the Inscriptions on the Tombstones and Monuments Erected In Memory of The Covenanters with Historical Introduction and Notes.
By James Gibson 1875

The Victoria Fountain was erected in Cumnock Square in 1898 to commemorate the Diamond Jubilee of the reign of Queen Victoria. It is made of pink granite and has two drinking spouts. It was originally topped by a gas lamp. In 1928 – due to increased traffic in the Square – it was moved to Gemmell Avenue. It was recently re-located again and now stands just off the Square on the Pawn Steps leading towards the Bus Station. 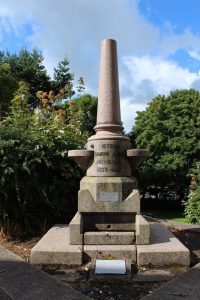 Located in the new Cemetery in Glaisnock Street, the Cumnock War Memorial was unveiled in 1921 to commemorate the 117 men who were killed in World War I. Built of white granite it is a tall smooth column topped by a stylised carved crown and a sphere. The stumpy base is octagonal with bronze plaques set on each side – on which the names are contained.

In 1950 a five-panelled granite wall was built to list the names of a further 37 soldiers who died during World War II. 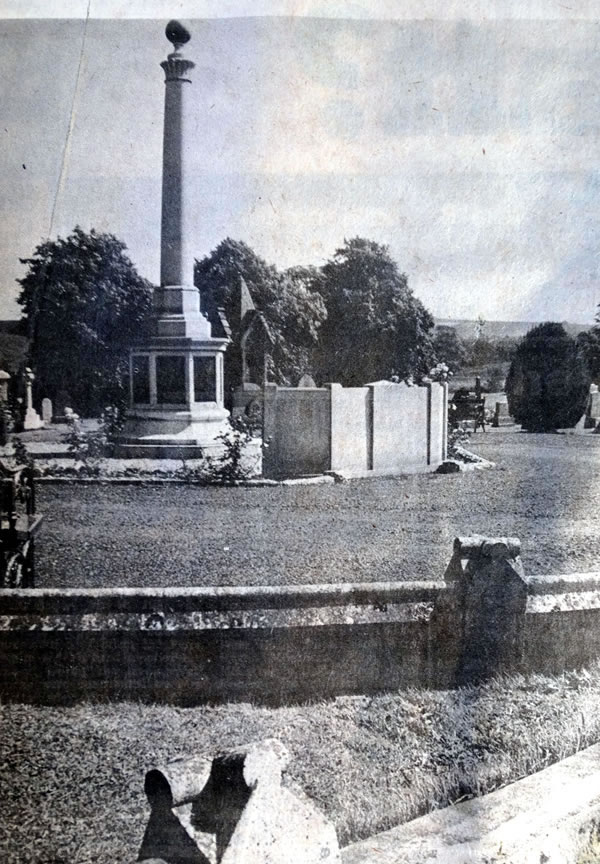 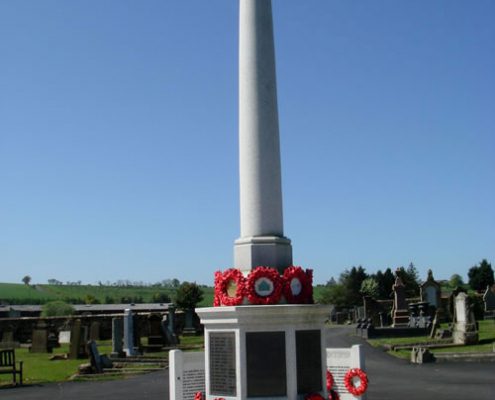