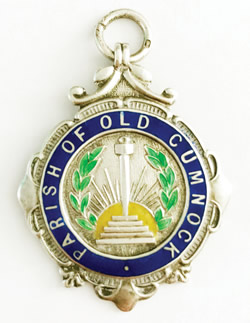 An article in the Cumnock Chronicle from August 1919 estimated that the cost of the medals would be between £600 and £700 but the same paper reports that in March 1920 that the War Memorial Committee treasurer be authorised to pay the account of £327 for the 728 medals supplied and to suggest they endeavour to get a rebate on that figure for the failure of the firm Fattorini & Sons of Bradford to supply cases with the medals.

The medal is silver and enamel in design. On the obverse is a circle of blue enamel with the words ‘Parish of Old Cumnock.’ In the centre the old Mercat Cross stands out in relief, surrounded by a laurel wreath in green and with the rising sun and its rays reflected behind the Cross.

Above this is the Fattorini & Sons Bradford imprint and underneath some assay marks: the Anchor mark for Birmingham, the Lion mark for sterling silver and a date letter for 1919. 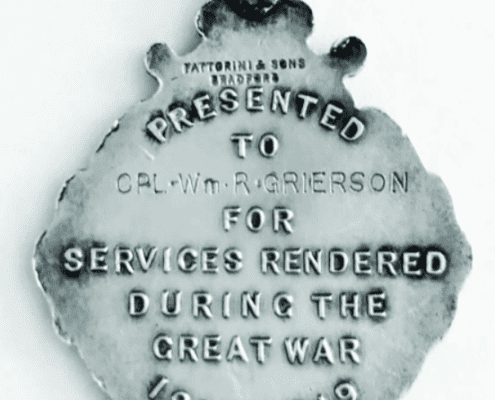