Around 1800, while repairing a snuff box, a local man called William Crawford had the idea of an invisible wooden hinge and started a vogue for such snuff boxes. These became very popular and were manufactured in Cumnock and surrounding villages. The industry’s greatest prosperity was between 1820 and 1830 and for a time employed over 100 persons in Cumnock. The boxes were of plane or sycamore wood which was seasoned for 5-6 months before use.

One set of workers made the boxes – a second set decorated them and a third group, mainly women and children varnished them. Boxmakers could earn a guinea (£1 1s) a week, scene-painters twice that and varnishers 12s. 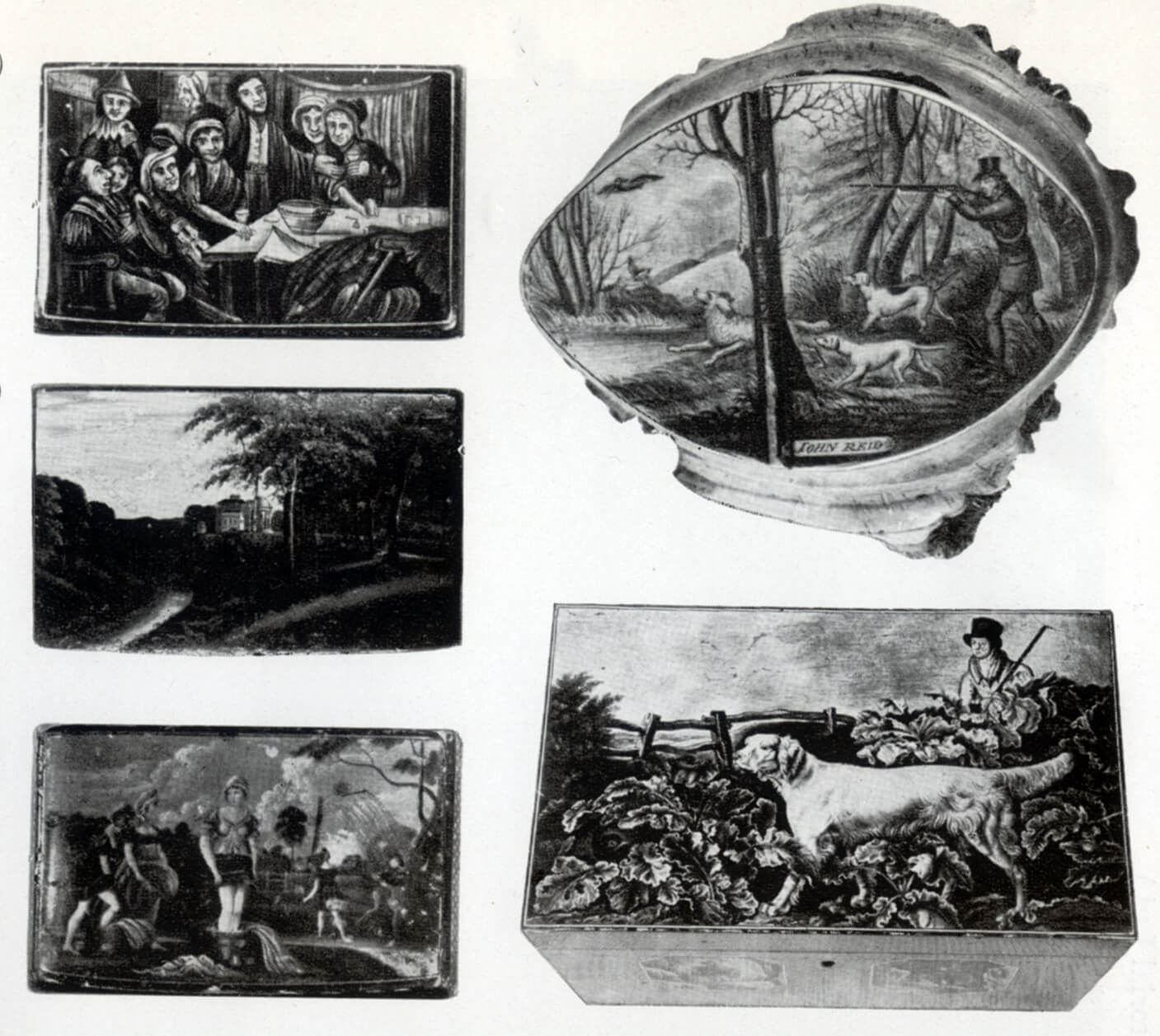 The high wages attracted young artists and three who afterwards rose to some fame worked as miniature painters in Cumnock :-

Gazetteer Of Scotland 1846
Cumnock. The manufacture of wooden snuff-boxes resembling those originally made at Laurencekirk, is extensively carried on here, and has been brought to a state of great perfection. These boxes are made from the wood of the plane-tree as being closest in its texture ; and at the original prices paid for them, a solid foot of wood worth three shillings, could be manufactured into boxes that would sell for £100. From the great reduction in the price since the extension of the manufacture, however, they are sold for less than a tenth part of the original value; and the painting of the boxes in devices has been nearly superseded by the introduction of chequering, which is performed in great variety by machinery, producing brilliancy of colour and elegance of pattern. The number of persons employed in this manufacture is about fifty.

The Topographical, Statistical, and Historical Gazetteer of Scotland 1848
The manufacture of wooden snuff-boxes, which, throughout Scotland, have, for their inimitable beauty, rendered – among snuff-takers, at least – the village surpassingly celebrious. In the last of these sources of support, Cumnock is competed with only by Laurencekirk and Montrose. An ingenious mechanician of the name of Crawford, seized – from a box which had been made at Laurencekirk, and which was sent to him to be repaired – the first idea of the celebrious Cumnock manufacture. Improving upon the pattern which was produced by previous inventors, he, or his successors, contrived to execute so delicately the hinge of the snuff-box, as to make the name of Cumnock essential to the vest-pocket’s storehouse of most in Scotland who are politely “led by the nose.” “A few years ago,” says a writer in the New Statistical Account of Scotland, ” a solid foot of wood, that cost only 3s, could be manufactured into boxes worth £100 sterling, and then the workmanship increased the original value of the wood nearly 700 times; but at present a solid foot of wood, will only yield, in finished boxes, about £9 sterling. “The great falling-off is to be accounted for chiefly by the satiating of the passion for novelty, snuff-takers being as curious in the recherché of their box, as antiquarians are in the high date and freshness of their discoveries; and, in a degree, by the sharpness of competition from the quarters whence the idea of the ‘Cumnock snuff-box’ was originally obtained.

Membership to The Cumnock History Group is open to anyone with an interest in the history and heritage of Cumnock and its inhabitants.