Not much is known about this inn, except that it was built in 1666 and was the principal inn in Cumnock. The street it stood in was once known as Back Street and it is believed that the name of the street was altered to Tower Street after the inn. Its mention in history came in June 1688, when the Covenanting minister David Houston was being conveyed to Edinburgh, by troopers, to stand trial. The soldiers and their prisoner stayed the night at the Blue Tower Inn and continued on their way in the morning of the 20th June, only to be ambushed by Covenanters near the Bello Water just outside Cumnock Parish. The story of the rescue of Rev Houston is given in John Warrick’s History of Old Cumnock, Chapter VIII – Cumnock and the Covenant, John Strawhorn also gives the story in Chapter 2 of his New History of Cumnock.

The inn was situated on the south side of Tower Street, between Glaisnock Street and Caddy’s Close. It was possibly demolished like most of the older buildings in the vicinity of the graveyard when it was converted into the Square. 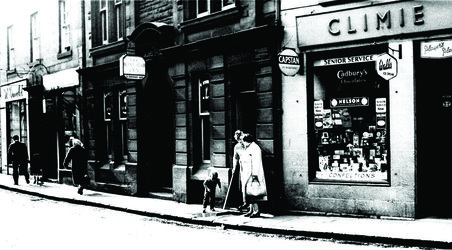 Later incarnations are TC’s bar and the Dagmar 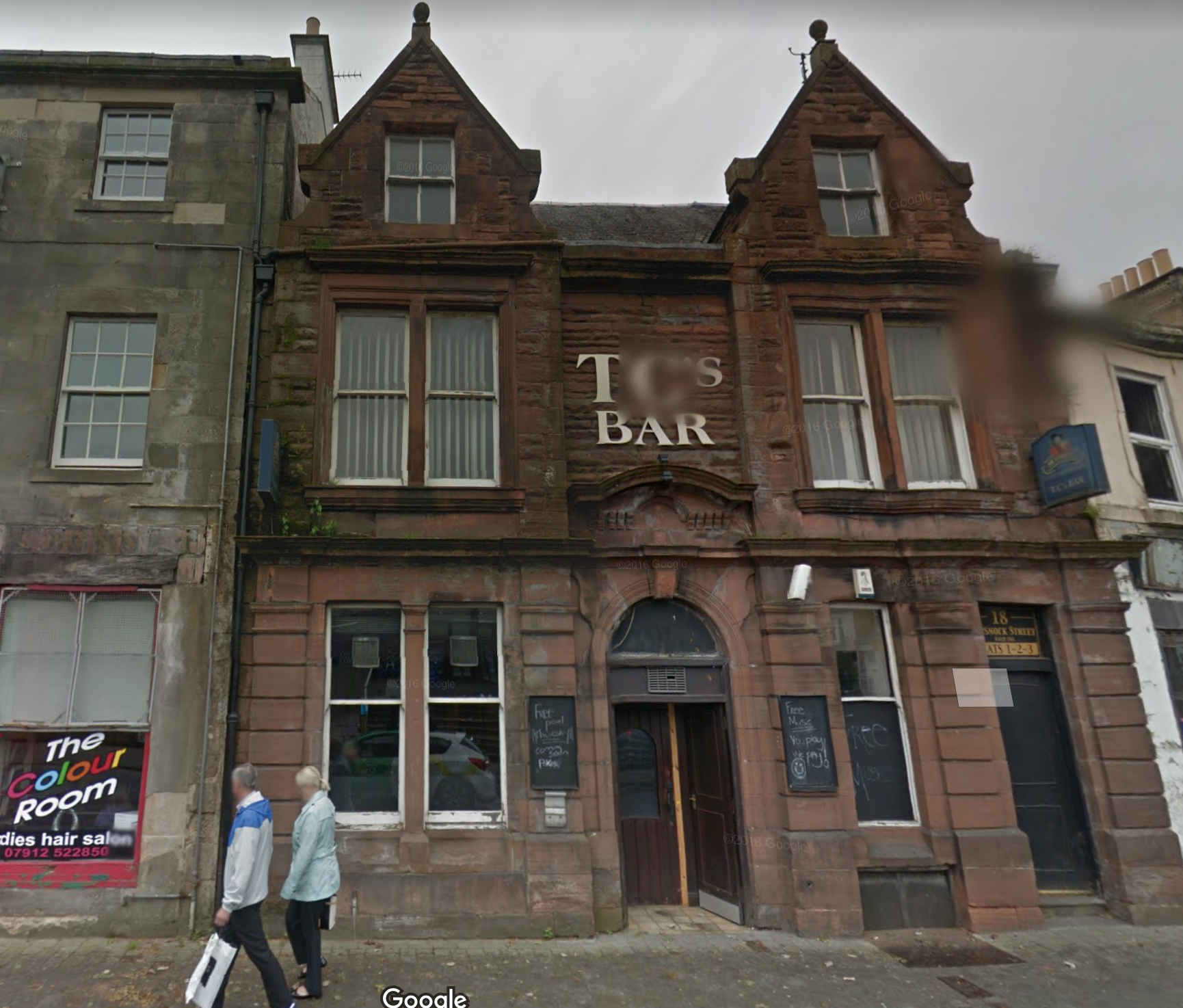 The buildings around the Craighead Inn are regarded as some of the oldest surviving buildings in Cumnock dating from the early 18th century. The Craighead Inn dates from before 1722 when a lease was drawn up for the annual payment of £21 plus 2 hens and 2 loads of coal. It is supposed to h 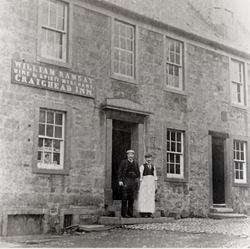 ave a ghost in the attic.

from 1818 -1836 the host was James McKinlay a saddler to trade. It is another name for the Dumfries Arms, as confirmed by Pigot’s directory .

The Dumfries Arms Hotel dates from 25th March 1717 and was originally known as the New Inn or Heid Inn and was an important coaching inn. It was referred to as the Donaldstoun Inn in 1828 It changed its name  to Dumfries Arms. (It was the Dumfries Arms in Pigot’s directory in 1826-7) with James McKinlay as  mine host.

James Murray seems to have been  the landlord for many years after James McKinlay so about 1837-1853, then his son James and daughters the Misses Murray ran it. 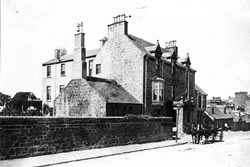 Residents have included Sir Walter Scott and Robert Burns (who made fun of the Inn by writing “Old Cumnock, where beds are as hard as a plank, sir”).  Cumnock Burns Club, which was founded in 1887, decided to hold its annual celebrations in the Dumfries Arms.

Adam Brown Todd, an outstanding local literary figure, presided at the Cumnock Club’s celebrations for the centenary of Robert Burns’s death in 1896. Mr Todd was a colourful character in the town and was entertained in the hotel to a public luncheon in his honour in 1903.

The Hotel boasted extensive stabling for the coaching horses across the road in Glaisnock Street at Munn’s Brae. These played host to many different business groups and people in later years and finally were demolished in the 60s to make way for new shops. The weather vane in the shape of a cockerel could be seen on top of the gable end of the stable roof and had been there for over a 100 years and was originally on top of the small spire of the former Old Parish Church in the square. The cockerel was given to the Baird institute. 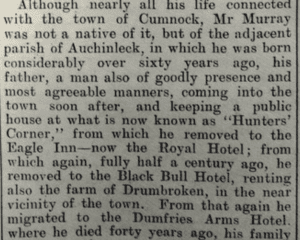 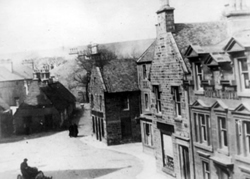 Adjacent to the Royal Hotel, the central portion of the building dates to the mid 1700s and was known as the Black Bull Inn. The Black Bull was a popular meeting and drinking venue. It also hosted many auctions and public meetings. The addition of an extension to the side of the building in 1900 saw the entire building reorganised to cater for increased use.

It became the Mercat Hotel sometime after 1940. 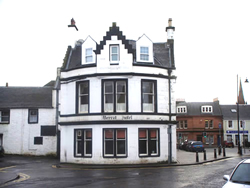 the block. It underwent much upgrading. It houses the 1906 bar / restaurant. 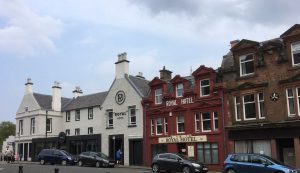 The present Royal Hotel building was erected around 1892 by R J Barrowman, the owner. It boasted “spacious dining, drawing, reading, smoking and billiard rooms – with numerous single and double bedrooms”. In 1956 the hotel was bought by Stevenson`s Dairy Farms and has since had a few owners. It has recently undergone extensive additions and renovation work and remains very popular with locals and tourists alike. 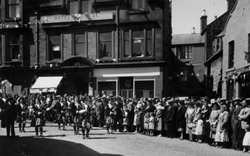 The Tup Inn was demolished in 2002 after a bad fire which spread through the entire building. The original Inn dated from around 1860 when it belonged to the Weir family. It was made up of several domestic houses joined together. The Tup Inn passed through various family members including James Tear who married Agnes Weir. 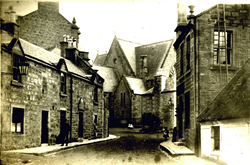 The Tup Inn remained in the Tear family until 1961 when John Weir Tear sold it to Frederick Scott Dick and he in turn sold it in 1965 to A & P Dick Ltd who owned both the Snug Bar and Sun Inn in the Square. The last owner was Alice McConnachie who ran the pub during the 1980s. The pub, known at the time as Jenny Tear’s, was a popular live music venue and the disastrous fire in 2002 ended the story of the building…but not quite! 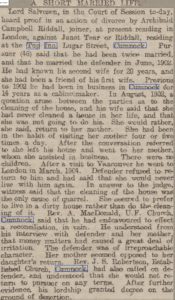 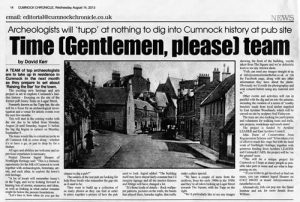 Raising the Bar was a heritage and arts project investigating the local heritage of Cumnock in East Ayrshire – in particular the site of the Tup Inn – and ran from July 2013 until March 2014.

The archaeological excavation took place in September 2014 and involved local volunteers and over 300 schoolchildren, some of whom created an exhibition at the Baird using finds from the dig for the Kids in Museum’s Takeover Day 2013. The project team also worked with local history enthusiasts to research and develop a new Heritage Trail for the town and was influential in the creation of the Cumnock History Group.

Raising the Bar involved many creative activities and events and you can read about the project on the Raising The Bar website http://www.cumnockraisethebar.co.uk

The building later occupied by the Wheatsheaf Inn (like most of the buildings in the Square) was built around 1800, shortly after the graveyard around the church had been cleared and most of the remains had been removed to the new cemetery in the Barrhill. The building was originally a house of two storeys, as were most of the surrounding structures.  By 1875 they were still houses and some of them had been owned by the late George Findlay, a farmer at Broomfield in Auchinleck Parish. His son George Findlay, a joiner, occupied one of the houses.

By 1885 the Wheatsheaf Inn had been established. It occupied the lower floor with its main entrance in the Square, the upper floor was converted into a flat with its entrance in Bank Lane. George Findlay owned the property, but the landlord of the Inn was Hugh Robertson. George Findlay died in 1887 and his eldest son, also George Findlay, who was a mechanical engineer, inherited the property. By 1895 George Findlay had become owner and landlord, possibly in conjunction with his mother (Sarah Findlay, nee Hamilton), and remained as such until at least 1925.

George Findlay seems to have left Ayrshire before his death – date unknown. The 1961 Cumnock Chronicle booklet ‘Cumnock Banks and Bankers, Shops and Occupants’ names Mr James Black as Landlord and Mr  John Cree as his predecessor. The Wheatsheaf Inn had been renamed the Snug Inn, and is now incorporated into the neighbouring Sun Inn.

Notes:-
1.   The youngest brother of the third George Findlay, William Findlay, was killed in the First World War. Information on him, other members of his family and men and women who served in the war from Cumnock are available on the History Group’s WW1 Cumnock Soldiers Blog – you can search for him and others at the right hand side of the page.

2.   The Cumnock Bank and Bankers, Shops and Occupants booklet is available for download HERE